Hope you’re doing well. Last week’s post was really long, so thanks for sticking with me. I feel like this one may be just as long, so fair warning. We’re gonna wrap up my list of top 15 read series this week. I’m excited about it, here we go!

Those who know me are probably wondering why this isn’t higher on the list. I mean, this book series changed my life. It changed a lot of peoples’ lives. It’s just amazing and was the first time I can remember that I committed to reading a series that was this long. (How the times have changed.) Now it’s normally an accident, I’ll pick something up, read it, love it, Goodreads it, and find out there’s like five books in the series. Three of them don’t have a release date yet, and the other two had two years in between publication. And so begins the torture. #booknerdproblems.

Back to Harry Potter, if you haven’t read this series, we can’t be friends anymore. For reals, what have you been doing with your life? There are no excuses. I will admit that as I get older the first three get difficult to get through, but I just marathon those in about a day, and then move on.

The series follows a young orphan boy named Harry who lives with his abusive aunt, uncle, and cousin. On his eleventh birthday he discovers that he’s a wizard and his parent’s were murdered by the darkest wizard of the time. Harry goes on to attend Hogwarts School of Witchcraft and Wizardry and makes friends, has adventures, and starts and ends a war.

There’s so much more that goes on in this series, including political intrigue, murder, impersonations and, I mean there’s mermaids, how can you go wrong with mermaids?

Just read the book series and then we can talk about it. Get on my level muggles!

Cassandra Clare has a problem. She can’t seem to stop writing about Shadowhunters, and I don’t really want her to stop. She’s obliging and is currently writing her third series that is set in the Shadowhunter’s universe. The Mortal Instruments is the first to be featured on this list as well as the first one she wrote.

This series follows Clary Fray, a girl who thinks she’s normal, until one evening she witnesses a murder. Except there’s no body and the perpetrators are invisible to everyone but Clary. What follows is her introduction to this underworld that, as a mundane, we are unable to see.

Throughout the series, Clary is inducted into this “club” of Shadowhunters and discovers more about her past and her dead father. She also learns that appearances can be deceiving and you shouldn’t always trust your eyes.

There is a host of secondary characters and b story lines that weave throughout the series. It was originally supposed to only be a trilogy, so near the middle there are a few bumps in the road as far as story goes. Cassandra has also been accused of drawing out plot lines and adding irrelevant details, but she is great at pleasing her audience.

City of Heavenly Fire is the sixth and final book that wraps up the series. It is a behemoth of a book, standing at over 700 pages. I read it in a week and loved every second of it. It perfectly sets up the following series while wrapping up the previous one. I’m happy to say that it ends as well as it began.

See what I mean about having a problem? On top of the nine books mentioned so far, Cassandra Clare has another three that delve deeper into this universe and another one on the way. The woman’s a machine.

In Infernal Devices we learn more about the history of Shadowhunters and their relationship with Downworlders (Warlocks, Werewolves, Vampires etc.).

We learn about the world from Tessa’s point of view. At the beginning of the series, she is simply a girl looking for her lost brother. Throughout the series she grows and changes as she finds love, heartbreak, and discovers her birthright and the truth about her conception.

As is popular in YA (Young Adult) fiction, there is a love triangle. In Infernal Devices it is between Tessa, Jem, and Will. Two Shadowhunters that Tessa meets while searching for her brother. The great thing about this love triangle, and what makes it different, is that a) it’s set in 1878 so we get to witness courtship, and b) both suitors believe that the other is equally right for Tessa. There’s a great twist at the end of the series that will either shatter your heart or make you hope for the future.

It’s a great historical fiction read, has an amazing cast of characters, and the hints that are dropped and picked up throughout both series’ just makes it unlike anything you’ve read before.

I can’t rave about this series enough. It is so good. The world building is amazing, the use of characters is amazing, and they use fairy tales. Throw in a cyborg Cinderella, moon sickness, and a villain who tried to murder a baby and you’ve got me hook, line, and sinker.

The reason I say there are four and a half books in this series is because Fairest is not a full length novel. It’s more of a novella. It gives us Queen Levana’s (our villain) backstory. In fact, each book is written from a different point of view and the books are titled accordingly. As the series goes on, and we are introduced to more characters we do get multiple points of view in a book.

The overarching theme, or story, of the series is protecting New Beijing and the world from the Lunar’s and Queen Levana. Our heroes also need to find the lost princess Selene who is the only person who could rightfully claim the throne from Queen Levana.

I haven’t finished the series yet, as you know, because Winter came out in November (So excited!!! I’m saving it for December) so it will be interesting to see how Melissa wraps up this series.

Some good news is that we have even more Lunar Chronicles to look forward to because a bind up of short stories is set to be released in 2016. Stars Above features never before released shorts that cover even more fairy tales and teach us more about the backstory leading up to the events in the book. 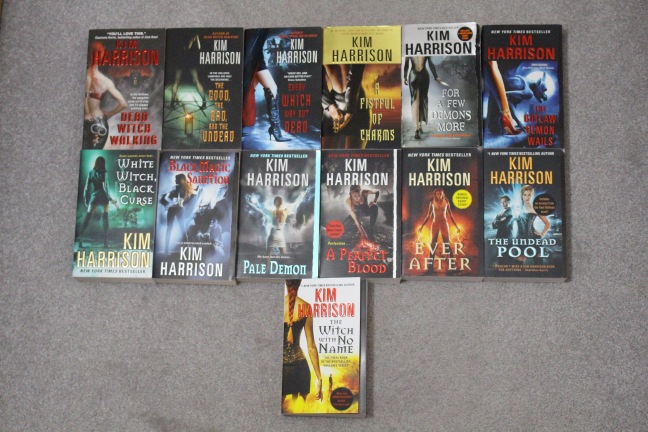 The Hollows is an interesting series. Not only is it the longest one on this list with 13 books,(which is funny, seeing as I said the 20+ ones are the ones I tend to dislike. This one snuck in before I made the switch) but it’s also urban fantasy that re-writes history. In the books instead of putting money into the space program in the 60s the American government put it into genetic modification.

The resulting virus was accidentally released and bonded with tomatoes. This killed the vast majority of the human population and also lead to magical and supernatural species like witches, werewolves, and vampires to come out of hiding because they were immune to the virus. This period is referred to as ‘The Turn’ in the books. The series takes place about 40 years later in Cincinnatti. It follows Rachel Morgan, a witch who is a detective/bounty hunter who works with the mundane police (FIB) on supernatural cases.

As the series progresses, we learn more about demons and their connection to the world and how Rachel fits into that. Another main focus of the books is Rachel’s relationships with her partners, a living vampire and a pixy, Jenks and Ivy. They add great colour to the series and my life’s dream is to find a way to nonchalantly work one of Jenks’ insults into a conversation.

I like the series because of the world, the character development, and the story line. It’s a fresh look at urban fantasy that combines history and supernatural elements. A great read that can easily grow with the reader.

That’s all for me folks, thanks for sticking with me through these long posts. I hope you enjoyed.